Why I Quit My Job

I quit my job last Friday.

How does one decide to quit a job like that?

When I was in Hawaii last year to run and write about the XTERRA World Trail-Running Championships, I crossed paths with a wonderful woman named Kim Rogers—whose full-time job was as a travel writer for Outrigger Hawaii. This essentially meant a salary and expense account to traipse around the Hawaiian islands, hiking and surfing and kayaking and meeting wonderful humans, photographing her journeys and writing about them all in meaningful ways.

And, several months ago, after six years at that job, she quit, too.

I doubt if I can articulate my own reasons as well as she did in this blog post entitled “Why I Quit the Best Job in the World,” but in it, she shared a wonderful quote attributed to Maya Angelou: “There is no greater agony than bearing an untold story inside you.”

When I was in elementary school, I understood this. In fact, it’s probably what got me through elementary school. I was young for my class, shy and socially awkward, an easy target for the innocent but nevertheless piercing sort of cruelty that children are capable of. In other words, I often felt grateful to escape school and go home. Though I loved learning, my favorite part of the day was composing stories in my head on my walk home each afternoon, then dashing up to my bedroom to start writing. I was brimming with novels and short stories, and they came rushing out of me with a ferocity I dream of someday recapturing in my adult life.

In his oft-quoted book, Outliers, Malcolm Gladwell suggests that mastery in any field requires approximately 10,000 hours of practice. I have no idea how many hours I’ve racked up putting pen to paper, or clacking away at a computer keyboard under the yawning emptiness of a blank Word document, but I can say this—despite majoring in creative writing in college and building a career thus far around writing-related jobs, the majority of those hours were between the ages of 7 and 17. 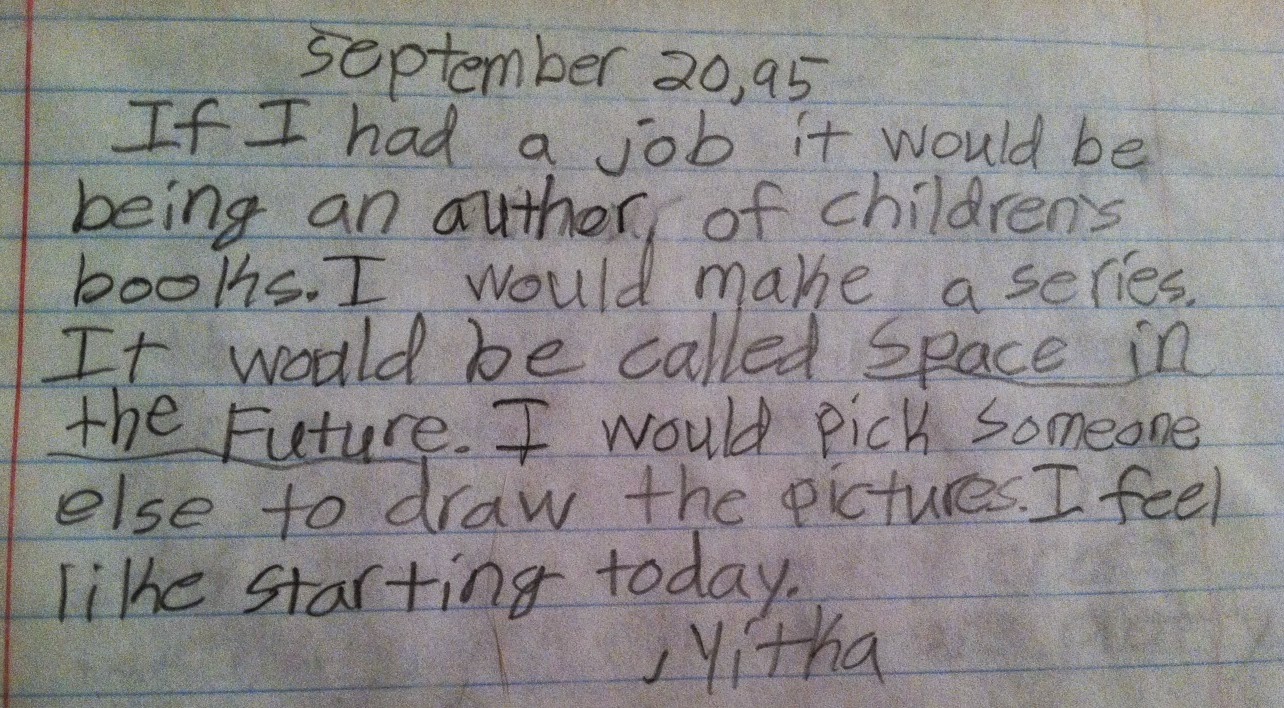 And I was confident back then, too. At age 10, I told my parents I wanted to publish my first book—a 50,000-word novel I’d written called Mrs. Graud. It was about a young girl befriending a hermitic, unpopular woman in the neighborhood who turns out to be quite kind, then reveals she has cancer, so the protagonist begins a fundraising campaign for the woman’s treatment. (On a sidenote, I recall drawing inspiration for this story from the Berenstain Bears Trick or Treat, in which Brother and Sister Bear bravely trick-or-treat at the house of an old woman rumored to be a witch, but who actually turns out to be very nice, as well as flush with caramel apples—which are better than Dum-Dums or Jolly Ranchers any day.)

Anyway, rather than resorting to stock responses like, “OK sure sweetie, you can do anything!” or “Haha, publish a novel at age 10? Hilarious!”, my parents told me if I was serious about getting published, I should do some research on what’s really involved.

So, I put together a 10-page (single-spaced, even) research report on how to publish a novel—preparing a manuscript, submitting a query, landing an agent, securing a contract, working with a publisher. I could learn a lot from my 10-year-old self. The report is filled with useful advice like, “An agent learns how to get the most from the publicity department, examines an author’s royalty statements, makes sure the author gets paid properly, sells subrights and licenses for a book, and is basically an author’s book’s greatest advocate. Agents are also helpful in the way that they can complain and yell at the editor about the things the author wants changed, so that the author himself won’t jeopardize his relationship with the editor.”

Outside magazine recently published a thought-provoking article by Ben Hewitt on the case for “unschooling”—a radical approach to childhood education that involves taking kids out of the classroom completely and letting them learn everything organically, “out in the real world.” It’s not in elementary school curriculum, for example, to have fifth-graders do research reports on book publishing. Not that I was ever “unschooled,” but how cool is it that I was encouraged to do something like that when I was young?

Every summer, though my parents always asked whether I wanted to attend camps or summer programs, like other kids did—and I did some (thank you YMCA in Estes Park for instilling in me a love for the mountains!)—above all, I just begged for free, unstructured time with which to write. And, I do wonder: Would I be the writer I am today without the thousands of hours I spent holed up with my imagination, exploring the characters I’d created, honing my understanding of language?

I still feel nostalgic for the reckless abandon with which I wrote when I was younger—not worrying about profitability, not worrying about how many clicks or shares something gets on the Internet, not ever doubting for a moment that my name would be on the bookshelf at Borders (RIP) by the time I hit middle school. Or high school. Or college.

Someone texted me earlier this week to say she’d heard that I’d quit my job. “Was this a long time coming?” she asked.

On one hand, no; when I took the job with Trail Runner, I certainly thought I’d stay longer than two years. I wouldn’t take back a moment of it, for I’ve grown immensely in these years—as a writer, as an editor, as a human being. And, I still plan to write plenty for Trail Runner—hopefully even more than I have the time for now.

On the other hand, yes, it was a long time coming in that I’ve spent the last two decades of my life talking about wanting to publish a book. Though I’ve been fortunate enough to tell many meaningful stories in my time at the magazine, I still have dozens more inside of me—ones longer than magazine format, ones not necessarily about trail running, ones waiting, if not demanding, to be explored.

Last week, I’d already made up my mind to give notice at my job when this happened: Midway through my 18-mile commute to work on a two-lane road, I came around a corner and had just barely enough time to swerve out of the way of a car that had crossed almost entirely over into my lane. We missed hitting one another head-on at 50mph by a matter of inches. It was just a few miles north of the spot where a young woman was killed in a head-on collision less than two months earlier. As I felt the adrenaline course through my body, my first thought was one of outrage—not at the careless driver who’d drifted across the highway, but at myself. I thought, “Damn it, if that car had hit and killed me today, I’d be so pissed that I never got to tell the world all my stories.”

← Is Ultrarunning—or Any Other Great Passion in Life—Sustainable?
In Praise of the Desert: A Road Trip →

My first book is now available!